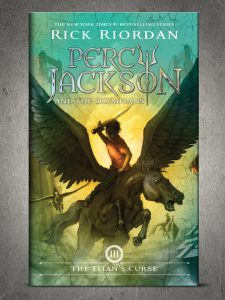 Blackjack is a black pegasus that turns out as an animal companion for Percy Jackson trough Rick Riordan’s book series about Greek and Roman demigods.

Blackjack made his first appearance in Sea of Monsters (Percy Jackson series book 2) and has been reappearing in the books ever since.

For those who are not familiar with the series you need to know that the original Percy Jackson and the Olympians series has 5 books and is continued in The Heroes of Olympus series for which book 5 is coming out October 7, 2014.

It is a mythical creature rather than an animal.The name Pegasus (plural Pegasi) comes from the Greek word for spring. Legend tells how the first Pegasus sprang from the neck of the Gorgon slain by the demigod Perseus. He was the son of the Gorgon and Poseidon, and wherever his hoof struck the ground, a spring flowed. The Pegasus flew to Olympus and brought thunderbolts to Zeus.

Pegasi are winged horses. They have been known to come in a variety of colors from brown, to white, to black, and even mixed colors (ex: brown and white). They are named after the original Pegasus. They are his offspring.