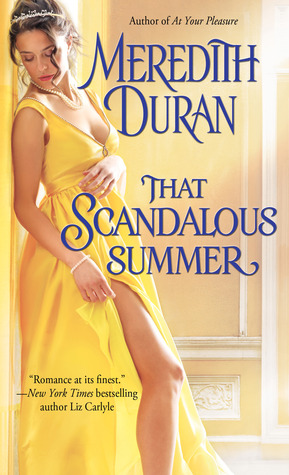 That Scandalous Summer by Meredith Duran

I got this book in paperback as a gift. For a while now I was looking for a good historical romance book. It is a regency romance – the kind with English noblemen and ladies, dukes and heiresses. I read the back cover intro to the story and thought it was passable. I love historical romances and they do wonders for me as a stress relief.

“And truly happy people…they were willing to try to understand anything. But as a result of their own comfortable lives, they so rarely could understand.”

The main female character Lady Elizabeth Chudderley is a merry widow who behinds her smiles and composure hides some human fears and past mistakes. She also appears to have a bit of a drinking problem due to the fact that her parents have shown her what true love looks like. She has one dead former husband and freshly ex-lover who turned out to be a total jackass. She is loved by her tennants and subordinates despite her frivolous lifestyle. Since her mother was from a much lover standing than her father was she is charmingly devoid of snobbism.

“Never did a woman have cause to doubt her judgement than when confronted with the pathetic evidence of what she had once somehow found appealing.”

Main hero of this story – Lord Michael de Grey is a second son of the duke. He has found that being a doctor and being very good at it, can make up for certain childhood dramas he suffered while his parents were the topic of every newspsaper gossip. After his brother threatens to destroy everything he holds dear he assumes a cover of a simple country doctor.

What I loved about this story are characters background and motivation. I like characters with flaws but determination. There were some intriguing supporting characters – and that is what makes a good story great for me!

“”Here’s the thing,” he said. “You’re a decent sort, which is more than I could say for myself before I met Lyd. And I suppose Lizzie might also have a taste for pastries one day. Would you know where to look for them?” This conversation was rapidly approaching the surreal. “I suppose I’d try the larder first,” Michael said. Sanburne nodded. “And if she only wanted the strawberry kind?” For God’s sake. “I suppose I’d take all of them, and let he pick out the ones she wanted.” Sanburne laughet. “I like that.” Stepping forward, he delivered a solid clap to Michael’s shoulder. “Remember this ambition. All the pastries. She wouldn’t settle for less, you know. Nor should she. And now…I believe I’ll pretend I didn’t see you here.” With a tip of an invisible hat, he walked onward. Michael stood in the darkness, listening to viscount’s footsteps fade. He felt oddly disoriented – as though he truly had been entranced, and only now had he come awake. All the pastries. He smiled a little. While Sandburne was slightly deranged, he was also right: Elizabeth deserved everything.”

One thought on “That Scandalous Summer – Book Review”