It’s barely February and I’ve already got myself a nice pile of new books. And these books are so pretty as well! The first book that arrived in 2020 was actually a late arrival from December 2019 – King of Scars (Nikolai Duology, #1) by Leigh Bardugo. I’ve already read it and loved it and it has caused me withdrawal pain from the long period of waiting on the next book that is Grisha related from Leigh Bardugo!

I used to buy mass market paperbacks only because they were cheaper and because I can fit more of them on the bookshelf. Even now I got a bookshelf that can fit exactly two rows of paperbacks on a single shelf and I love it!

Lately I’ve been indulging in buying some hardcover editions. I am simply swooned at how beautiful they are! I blame Leigh Bardugo and Holly Black! I was enamored into their books to wait on my usual mass market paperback editions! Holly Black’s Queen of Nothing had a six months (!) wait time for the paperback edition to come out!

I find Leigh Bardugo’s books especially beautiful! Just look at the Ninth House (Alex Stern, #1) I got recently! If some other book series were as well designed I might have been forced to get more hardcovers!

There is a problem I’m facing as a lover of some older urban fantasy book series is becoming an issue here. Some of them are out of print – Shift (Shifters, #5) by Rachel Vincent is sold out at my usual book buying places. This has left me with buying books three and six in the series while they are still available. Also they are different format sizes which sucks for the shelf placement.

The last book that arrived just the other day was a pre-ordered mass market paperback of one of my favorite urban fantasy book series: Storm Cursed (Mercy Thompson, #11) by Patricia Briggs. The waiting time between the books for Mercy Thompson is almost a year for me now. The only thing that’s keeping me still when I see the new hardcover book in the series has come out; is a look at my shelf and all other books in mass market paperback editions I already own. I’m actually pleased at how nicely they fit there and the thought of getting just one new book in a different format leads to frustration of having them all in beautiful hardcover editions. The hobby of having some of my favorite urban fantasy book series complete in hardcover is not only really expensive but for some book series an extraordinary feat of good luck as well. As I’ve mentioned before, many of the books from the series are sold out and finding a hardcover edition in good shape is extra problematic for a book lover based in EU.

It is a long standing fantasy that one day I will own my favorite book series in hardcover editions so I can reread them anytime I want without having to be very careful not to crease the spine of the book. It is a bookish peeve I guess but I get upset when my paperback editions get hurt and the spine of the book suffers damage.

In conclusion to this one month book haul in my defense I can say that I’ve read more books in January than I’ve bought! I’ve read seven books and bought six. From the new books I got I already read two and plan to read others soon as well!

Here is the list of the books I got:

The Queen of Nothing (The Folk of the Air, #3) by Holly Black 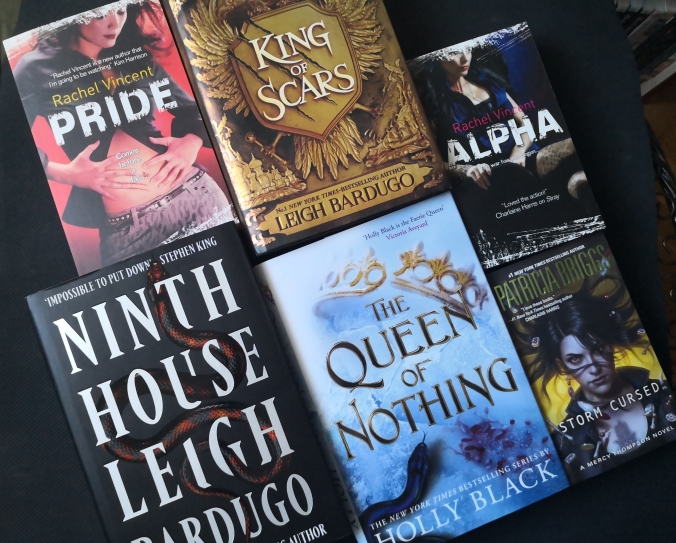